I have been lucky to participate in the project lead by Sarah McAnulty called Skype a scientist. So far, I have done calls with two grades:

I should say it was great to be able to talk with students, tell them about science in general and my research. It was really fun to answer their questions. I felt they were surprised about talking with a normal human being that also happens to do science. I feel really grateful to Sonia and Cindy, they are wonderful teachers, making efforts to connect their students with science and those who make it possible. We also did a Q&A session, which I compiled below.

How old are you?

Do you dissect rats?

My favorite animal is the Lion.

My favorite color is green!

Rats are fantastic animals. They are super smart and very similar to humans.

How and why did you become a scientist?

I have always been into questions, I am super curious! Scientists work to ask interesting questions and that’s the best job ever for curious people. Scientists also like to fix stuff. If we find ways to do it, we can help people in need.

Is being a scientist fun?

It’s super fun! You get to see crazy stuff nobody else has ever seen. You are always learning and discovering new things.

Do you want to be a scientist forever?

Is your mom or dad a scientist?

No, my mom is an accountant and my dad is a salesman. I am the only scientist in my whole family!

Do you have any kids?

Do you have friends?

Do you have any pets?

Nope. But I had a dog before coming to the US and I’m looking into having a cat!

What do you do on your breaks?

I like to go hiking, I have seen BEAUTIFUL places in nature!

When is your birthday?

August the 12th (Candy is welcome)

Meat, and Pasta, and Ice-Cream, and Candy, and Chocolate, and Pizza, I eat a lot !

I invent things that look like a robot to trap rats. Does it count?

I had a YouTube channel (in Spanish). I teach different things (Math, Science, …) there! My channel is Profesores Gama.

Did you like science since you were a child?

Actually, I liked Math the most. But math is most beautiful in Nature, it’s everywhere!

Is rats the only animal you like to observe and study?

Nope, I like most animals! I worked with crabs before working with rats. Hopefully I will be able to work with mice, flies, and fish.

How many rats do you have in your lab?

It depends on the number of babies! We can have hundreds!

They eat a lot of things, they go crazy about M&Ms and Cheerios.

What kind of rats do you observe?

Do you name your rats?

Yes! My favorite one is called SD7A4B1E3F3G1M2 but I prefer Amelia

Do you observe boy rats too?

What do you do with the baby rats?

I put the baby rats with mothers and see how they take care of them.

Is your lab big or small?

We have several rooms in two floors, fairly big.

How do you observe your rats?

Where do you find your rats?

Do your rats wear clothes?

Nope, any ideas in mind?

Where do you keep the rats so they will not escape?

They leave in comfortable cages with rat friends.

What clothes do you use inside your lab? Uniform?

Why did you want to become a scientist?

I don’t know…I just felt really curious about how the natural world works. I could see beauty in Math and later in Chemistry, and wanted to learn more. Living things are by far the most complex systems we know of, so I was totally down for the challenge of figuring out how they work.

When did you become a scientist?

This question is really challenging. The correct answer is I don’t know. I am not sure there was a date. I could choose a random date when I was around 10 or I could say I’m working to be a scientist. As it happens with everything, there are some days when I feel more scientist than others.

How many years did you have to go to school before you became a scientist?

I can tell you how many years I’ve been in school. Elementary school was 7, middle/high-school was 5, then university added another 5-6 years, 2 years for my Master’s of Science degree. School is just the beginning.

Is science different in Argentina than in the US?

Science in Argentina is different. To start, we speak in Spanish and drink mate instead of coffee or tea during breaks. One thing that the US has is people from many different places, I’ve met people from all the continents, all of them working here, together, to make the best science they can. In Argentina, things are a bit complicated because of the rough economic situation in the country.

What fascinates you about neuroscience?

Evolution has given animals a biological machine that is far more advanced and efficient than anything we’ve ever built or known. We have the most complex machine between our ears and, curiously, we can only understand the world using that machine. We only perceive what our brain interprets, we can’t be sure about things being out there. For all we know, there could be nothing out there, everything could be an illusion recreated by our minds, playing inside our heads. How do you know the color I call red is the color you call red? The first time I heard that question I was 12 years old, and it continues to blow my mind.

What is the thing that surprised you the most about studying the rodents?

Rodents are extremely robust. Also, I can’t help but to have the feeling that their life is so much faster than ours. Their metabolism is higher, their lifespan is shorter. Five minutes is a lot of time for a mouse, much more for the tiny neurons in mice brains. Still, five minutes is not enough for long term events that influence 99.999% of the biology of animals.

Yes, different species have different brain sizes. This is true for almost all living things. Here’s a cool plot about brain size1!

It is also impressive that brain sizes grow predictably with body mass23. 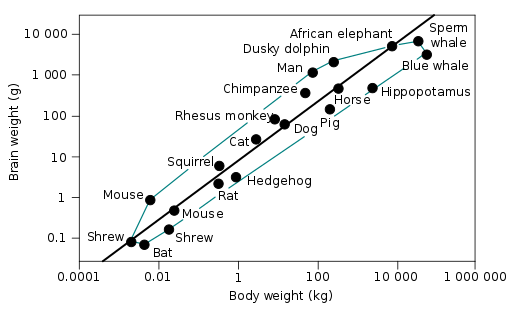 The brain size question is tricky because we try to jump into conclusions about intelligence or cognitive abilities (also see below). The truth is, most of what a bigger brain is there for has nothing to do with what we humans call inteligence. For example, if you are a bigger animal, you need to receive signals from more places and you have larger muscles to control (aka, there’s a lot of room to tickle an elephant and moving an elephant needs a lot of neurons). Hence, bigger animals will tend to have a bigger brain.

Are brains smarter if they are bigger?

This is a frequently asked question. The key thing to consider, as previously stated, is the size of the animal that carries that brain. A mosquito can’t carry a whale’s brain, simply because it’s own size is smaller than the whale’s brain. However, mosquitoes have a nervous system that allows them to solve complex tasks and have successful reproductive endeavors.

Brains are there to sense, process the information we receive from the outside world and make a decision (aka move towards/away). We also have to consider what smart means. But that’s a discussion for another day. Briefly, we tend to think about being smart as having higher cognitive abilities. For example, a higher cognitive abilities might usually depend on integration of several sensory stimuli and abstraction, like appreciating the regular patterns of a particular instrument in a symphony. Those activities tend to correlate well with the size of a region of the brain called the cortex, which is pretty big in primates.

No, but I can show you pictures of brains.

These are sections of a mouse brain.

This is a picture of a special staining showing different kinds of neurons in a rat brain.

Can rats swim underwater? Where do they live?

Yes they can, check this cool picture of rats swimming. We actually use the fact that rats are good swimmers to challenge them in a maze. It’s called the water maze (also known as Morris maze).

Rats are highly adapted to many different ecosystems. They can also do pretty well near human populations, scavenging city waste for a living. The map below shows an estimate of where rats live (aka everywhere):

What is the difference between a rodent brain and a human brain?

They are pretty similar, both contain massive amount of cells called neurons and glia. A key distinction is the size of the olfactory bulbs of a rodent and a human. While rodents have huge amount of brain devoted to the task of smelling the outside world, human bulbs are tiny. We are visual animals and hence, much of our brain is devoted to seeing things.

How is it possible to learn from a rodent’s brain how our brain works?

Humans and rodents are pretty related. We have a huge amount of DNA in common. We both have spinal cords and a similar brain organization. Many of the things that keep us alive have been functioning since many many years ago and are shared in the evolution of both animals.

Studying the brain of a rodent can tell us many ways in which human brains function, and can help us build models of human diseases to try potential treatment before risking human lives. If it works in mice, there’s a good chance that it will work in humans. At least it’s worth a shot. Moreover, if it doesn’t work in mice, especially if mice show detrimental effects, there are good reasons not to try it in humans.

What equipment do you use in your lab to study rodents?

Lots. Most commons are test tubes, pipettes, and syringes. The microscopes are the fancy equipment we use to take great pictures.

This is a pretty challenging question. I don’t want to get into the What is math question. People tried to teach horses how to do math, which was a commercial success, but turned out that horse was not actually doing it for real, it was responding to the signals of its owner (see Clever Hans here). Crows can solve puzzles that need a pretty deep understanding of the physical world, like fluid displacement, compare object lengths/weights. In my opinion, that comes super close to our math. Youtube is full of awesome crow videos!

We know mathematical abilities are not fully related to language, cultures that don’t have the words for specific numbers can distinguish different amounts and do simple math without any formal structure. Many animals can definitely learn simple tasks that are related to number of events or a certain amount of time. They can distinguish amounts (e.g., 10 M&Ms is more food than 2 M&Ms), and they can keep a count. However, we often face difficulties to be certain of what is going on in the rat’s head. We can’t ask, we can’t be rats. Thus, the best question would be whether we can test unequivocally that rats are performing mathematical operations, counting, or have any representation of numbers.

For those of you really tempted to dig further into this question: